Oliviero Toscani – On Creativity and Courage

Exclusive interview with Oliviero Toscani, the illustrious Italian photographer, best-known for his subversive advertising campaigns for Italian brand Benetton, from the 1980s-2020. He discusses creativity, courage and the purpose of life with founder of The Together Project, Amanda Talbot.

Growing up in the 1980s and 90s, fearless photographer and creative director Oliviero Toscani's images were infamous for the inclusion of beautiful teens from all races in his campaigns for Benetton. I'll never forget walking into a United Colours of Benetton store, as a kid who grew up in white Australia and hid my identity as half-North African, to see splashed across the store campaigns with unstereotypical young models from all ethnicities smiling at me. I had never seen anything like it. It was the first time in my life where I recognised that beauty belongs to everyone. The ad campaigns made a kid like me who felt ashamed of where my family came from because it didn't fit the ‘norm’, feel that maybe I too could be beautiful even if my eyes were a funny shape and my features didn't look like everyone else. "Everyone is unique. That’s it. Start from there", shares Toscani. "There are not two people in the world who are the same. Nobody is ugly". The images are still imprinted in my mind as clear as the first time I saw them. Toscani in his nineteen year tenure never shied away from divisive visual statements that dealt with issues including racism, religion and human rights. When I first started to work up the business model for The Together Project I would say to my team "think United Colours of Benetton". What I mean by this is I wanted us to be an inclusive platform. Not only for the people who worked at The Together Project but for the vendors, artisans, causes, film makers, photographers, journalists and whoever else who should become part of our community. Not only did I want us to be inclusive but I wanted to make sure we shone the light onto the environment and human rights even if it made people uncomfortable at times.

It felt only fitting to do our first interview with the man who was a pioneer, ahead of his time in bringing politics to the forefront of a brand’s identity. It really was such an honour to have the chance to speak to Toscani. It was my first interview I had conducted in over six years so I felt a little rusty. Everything that could have gone wrong hours prior our Zoom conversation did. To my horror, I discovered that my internet had been cut off so the attempt to go live with him at the proposed time was no easy feat. I got there but I entered into the interview a little nervous – I didn’t ask him at the beginning how he was or where he was. I just jumped straight on in there with my hard hitting questions. Regardless, Toscani shared so many nuggets of wisdom and at times I didn’t even know what to do with them.

Since we spoke, I haven’t been able to let go of what he shared as his main purpose in life – to be honest. It sounds so easy but I think if one really examines what, he is saying we have to be always vulnerable to allow ourselves to be honest, not in what we say but to acknowledge who we really are. The crux is we should never hide who we are because that is what makes us unique to stand out amongst everyone else. He also made very clear to me to never be afraid to fail because we can’t fail. Failure is part of our evolution in the respective personal journeys that we are all on. “There is no such thing as to fail. Belong to the evolution. You can do good things just because you failed the day before. You maybe can’t perform so well the day after if you didn’t fail the day before,” he shares. I feel this interview was not my greatest moment but fortunately it was with a man who made it into something I will never forget. I really hope you enjoy the first of many conversations with people who really have, and are changing the world. Watch the full interview here.

AMANDA: The people I’m working with, they too are really doing their best to try to make some kind of change, and I think they’re very innovative people. Most of them say they’ve found their purpose and why in life. And I’m wondering what is your purpose in life, what has it been? The purpose in your life and within the work you have done over the years?

Toscani art directed the 2018 Benetton campaign after a 17 year hiatus.

Toscani art directed the 2018 Benetton campaign after a 17 year hiatus.

“"You shouldn’t be afraid to not be secure. You can not be creative and be secure. If you are secure it means you are doing something you have already done or it has been done. You don’t do anything new. So you have to have the courage". ”

He might be inclusive, challenging, fearless, exploitative or prone to over-simplification, depending on your point of view, but Toscani is definitely a professional provocateur. He has been the creative force behind some of the world's most successful brands, creating throughout the years advertising campaigns for Esprit, Chanel, Fiorucci, and photographing for illustrious magazines such as Elle, Vogue, GQ and Harper's Bazaar, to name a few. His most unforgettable, and infamous images are of a newborn baby, still with an umbilical cord attached. A nun and priest kissing. A white woman, black woman and Asian baby wrapped up together in a blanket. A man with AIDS, on his deathbed, surrounded by his family. Three identical raw hearts, with the words ‘white’, ‘black’ and ‘yellow’ written across each. All of these images were masterminded by Oliviero Toscani as advertising campaigns for Benetton, where he was art director from 1982 to 2000 and in turn he transformed it to be one of the world's most recognised brands.

He returned to the brand back in November 2017 until his recent departure in February 2020. He was dismissed for a second time by Benetton for again crossing the line. The line was crossed, the first time, when Toscani put death-row prisoners in a campaign. The Observer called it “shock tactics that finally backfired”. For Toscani he says, “You shouldn’t be afraid to not be secure. You can not be creative and be secure. If you are secure it means you are already doing something you have already done or it’s been done. You don’t do anything new. So you have to have the courage”.

It was announced early this year after comments he made on an Italian radio show about a 2018 bridge collapse that killed 43 people raised protests that he had gone too far and was dismissed. Two days after the statement, Toscani said on Twitter that his comments had been taken out of context. In an interview on another radio program he said that he was “destroyed and truly sorry”.

Speaking to Toscani I can understand how people could take him the wrong way. He isn’t the easiest person to speak to but for a man who has been so socially progressive it seems wrong for seventy-seven-year-old Toscani to be remembered for a man who doesn’t care. His work demonstrates a very different story. In 1990, he conceived, created and directed cult magazine Colours, the world’s first global magazine and in 1993, he founded Fabrica, the international centre for arts and modern communication research. Toscani’s work has been exhibited at the Biennale in Venice and he has been awarded four Lions d’Or prizes at Cannes, the Unesco Grand Prix and received many other prestigious awards and accolades. It’s an allegory of our times, that the stalwarts of so much of the world’s creative advancement and breakthroughs for humanity, are now criticised, as the goal posts of what is acceptable and politically correct are changed, always for good, by the next generation. Watch the full interview here. 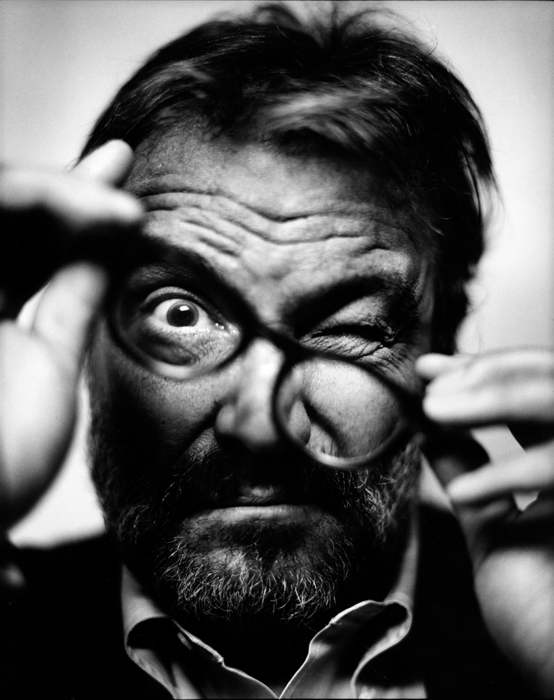 "The purpose of life is to be honest" - Oliviero Toscani