From growing up in a tiny rural town in Australia, to hanging out on the streets of Paris, photographer Sam Armstrong transports his laid back and laconic attitude with him wherever he goes.

A solo artist who prefers working alone, to the bright lights of highly polished studio shoots, his skill lies in capturing raw, and unguarded moments.

In this series, Pigalle Duperré, Armstrong documents the unfolding action on a basketball court he stumbled across in Paris. His photos show the personalities visiting the court each day and document the court’s founder Stéphane Ashpool. “As soon as I discovered this place I realised I needed to document it,” recalls Sam. “I was in Europe for about eight months, my base was Paris and I didn’t speak much French but I went off body language. I didn’t know about Pigalle Basketball until I walked down Rue Duperré the last week of my trip. It was a great discovery – I wish I had had more time to capture it, but saying that, I think I got everything I needed,” Armstrong says.

Wedged between two mid-19th-century sandstone Parisian apartment blocks, in the chequered suburb of Pigalle, Sam quickly gained the trust of the court’s custodians, assimilating into their world. He found young locals, used the court in the same way Australians use the beach; Coming each day to relax, find their friends and muck around.

“I wasn’t into basketball before this, I wasn’t into any sport. I knew nothing about it. I played with them, they all laughed at me. I could see within the basketball court that people celebrate more openly and express themselves more freely. They embraced a true sense of family at that place, care and love for one another. These kids go to this court every afternoon.” 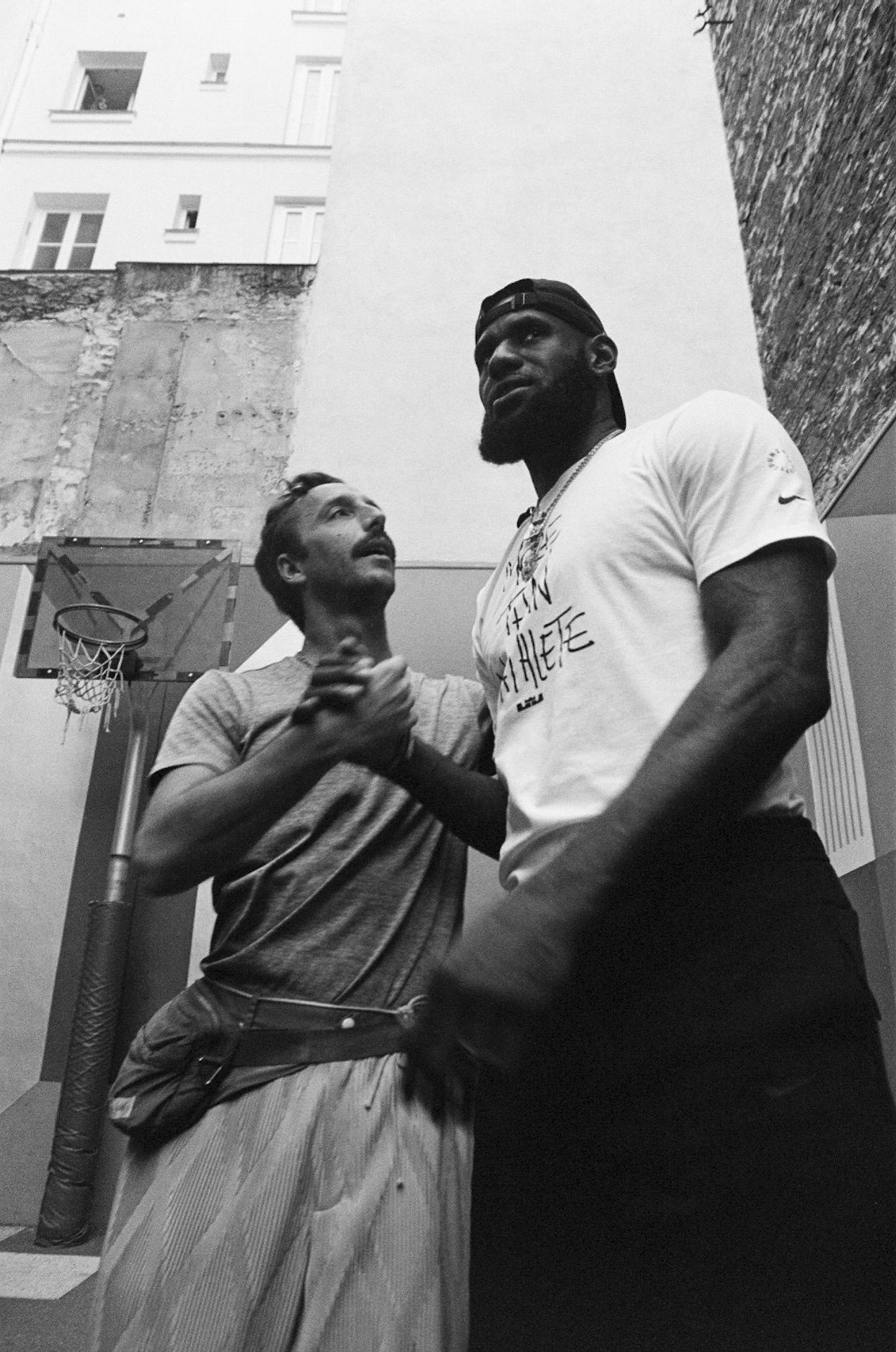 Back in 2015, Ill-Studio first collaborated with Stéphane Ashpool’s French fashion label Pigalle to create a multicoloured basketball court, situated between a row of buildings in the 9th arrondissement of Paris.

Capturing all his images on an RZ-67 medium format, and a Canon 35mm, the series of photos Armstrong produced takes on a lurid, hyper real tone thanks to the court’s paintjob.

“Stéphane Ashpool – its founder – spoke about how it was his passion to direct these kids and encourage them to play basketball and give it their best and be really serious about it,” says Armstrong. “He feels that if they can sustain the passion they show at the court, then they can apply it to other parts of their lives later on. He’s so inspiring for these kids. Speaking to some of them, I noticed how highly they regard him. I learnt that Stéphane has put together a professional basketball team using some of the best players at Pigalle and they go on trips around the world. “He’s taken them to the Philippines and South America, and other places that are so different from where they’ve grown up. I don’t know why there was such a warm family feeling at the court, but I suspect a lot of these people connect here every day,” Armstrong says. 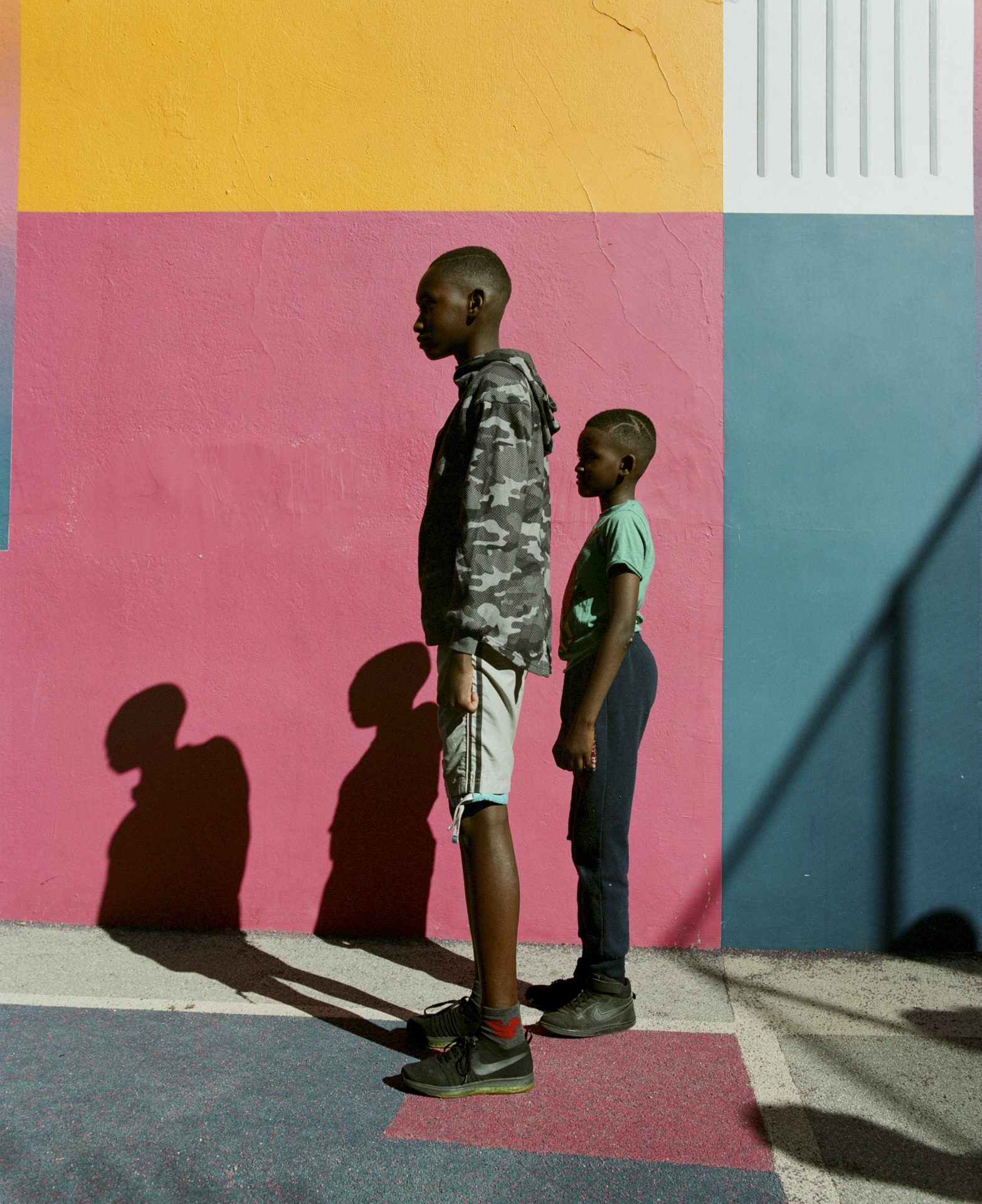 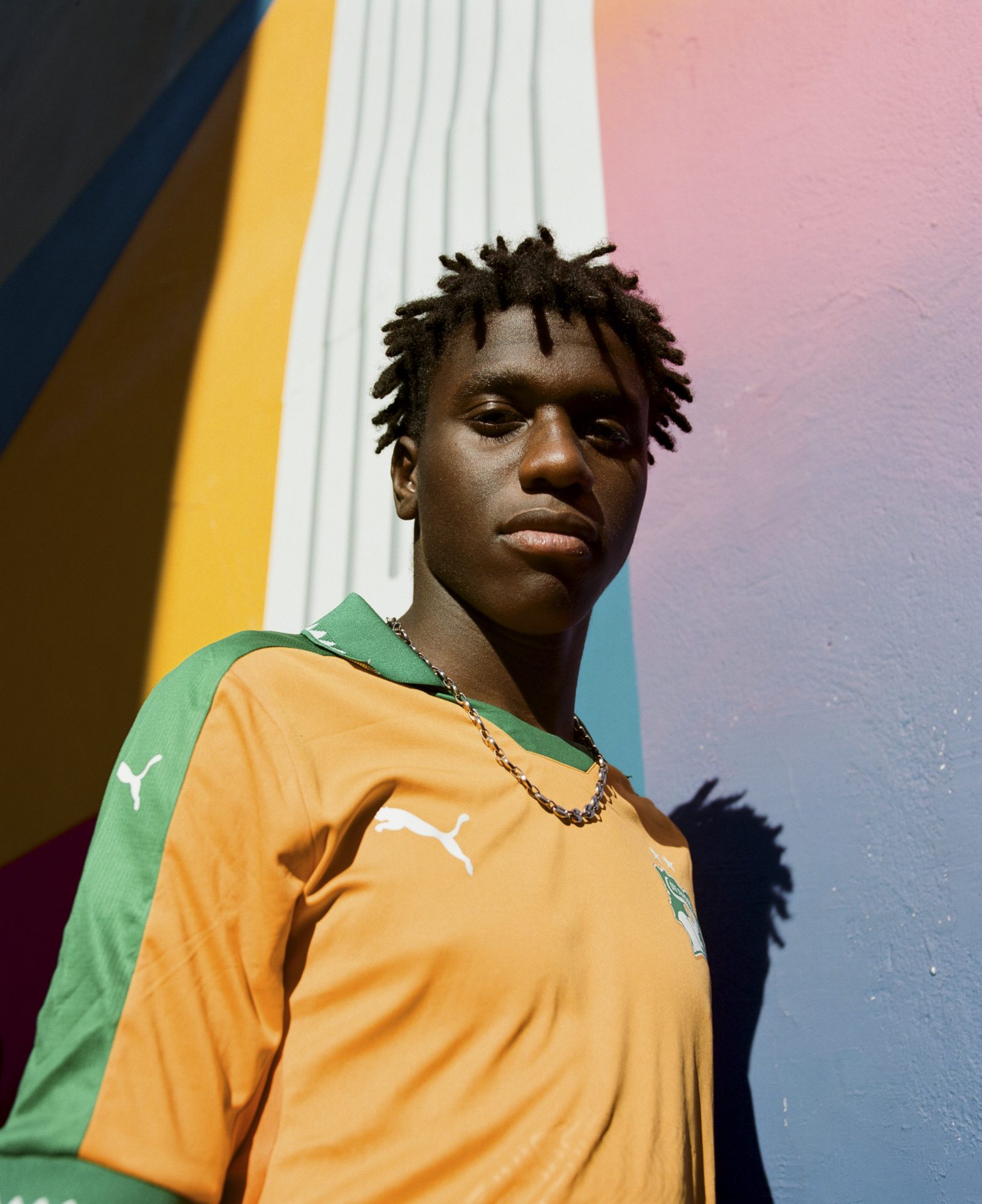 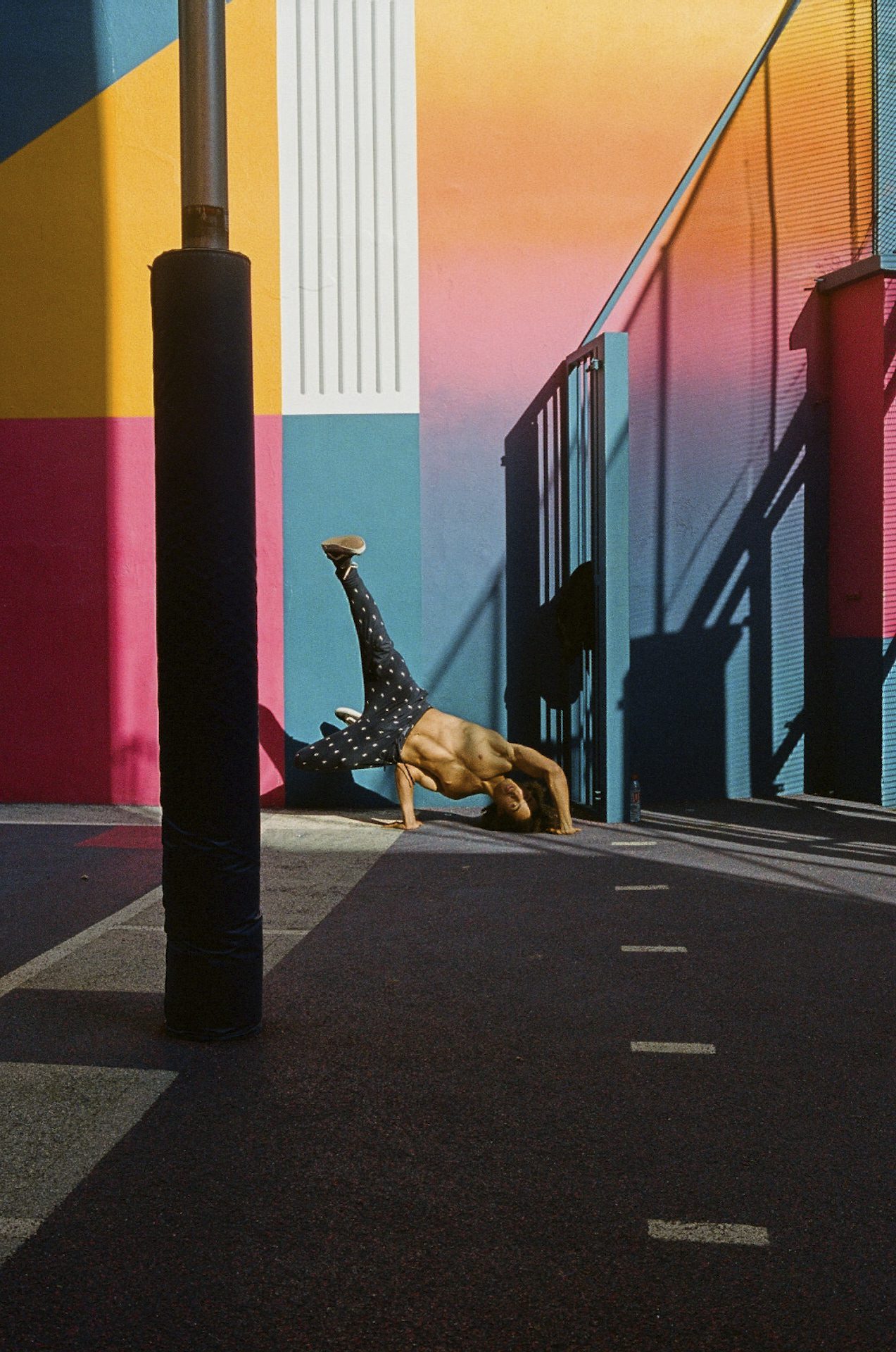 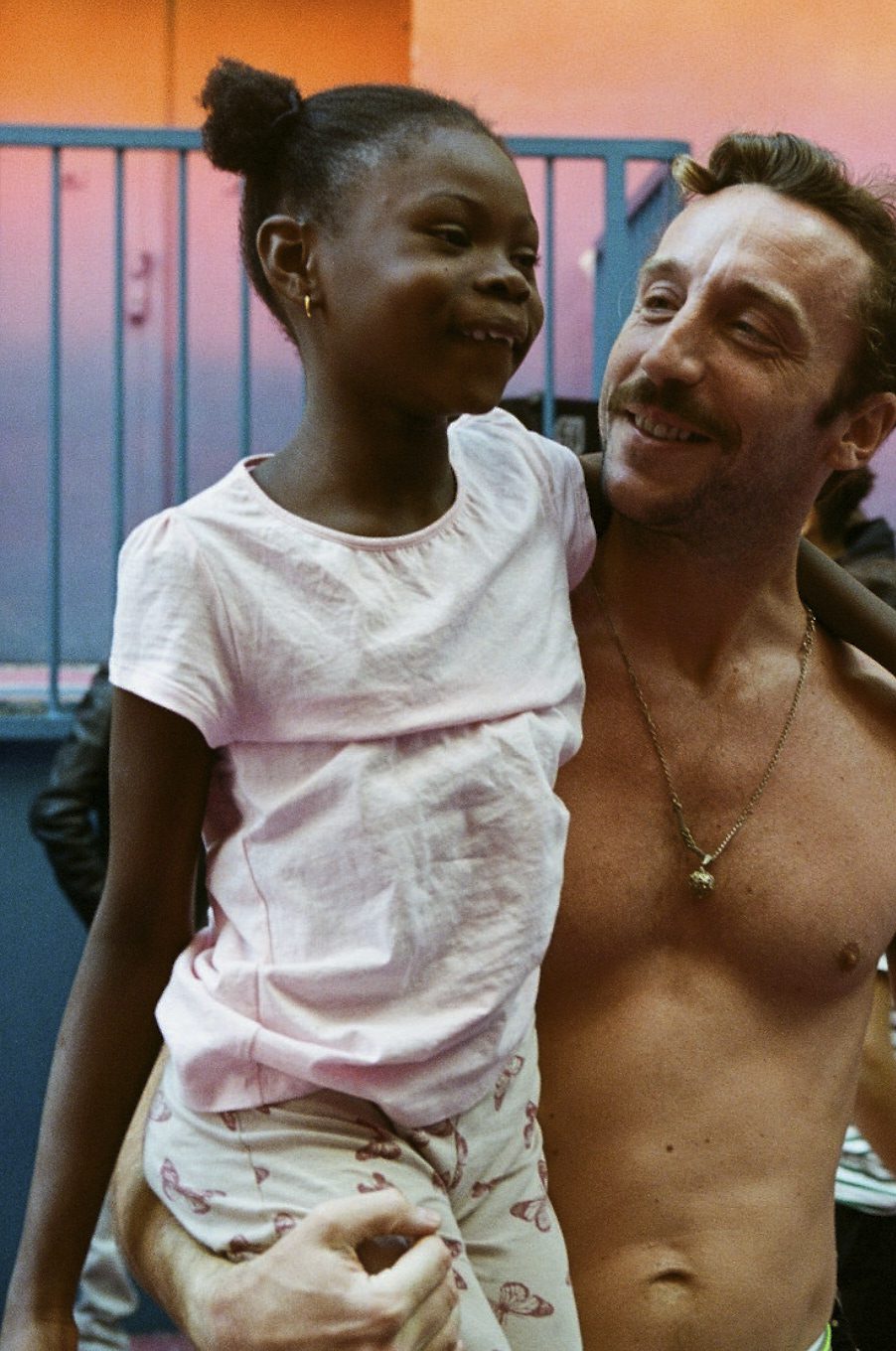 “Just to feel like you belong and have love. I admire it when people have something like that. It’s an important part of being a human.” 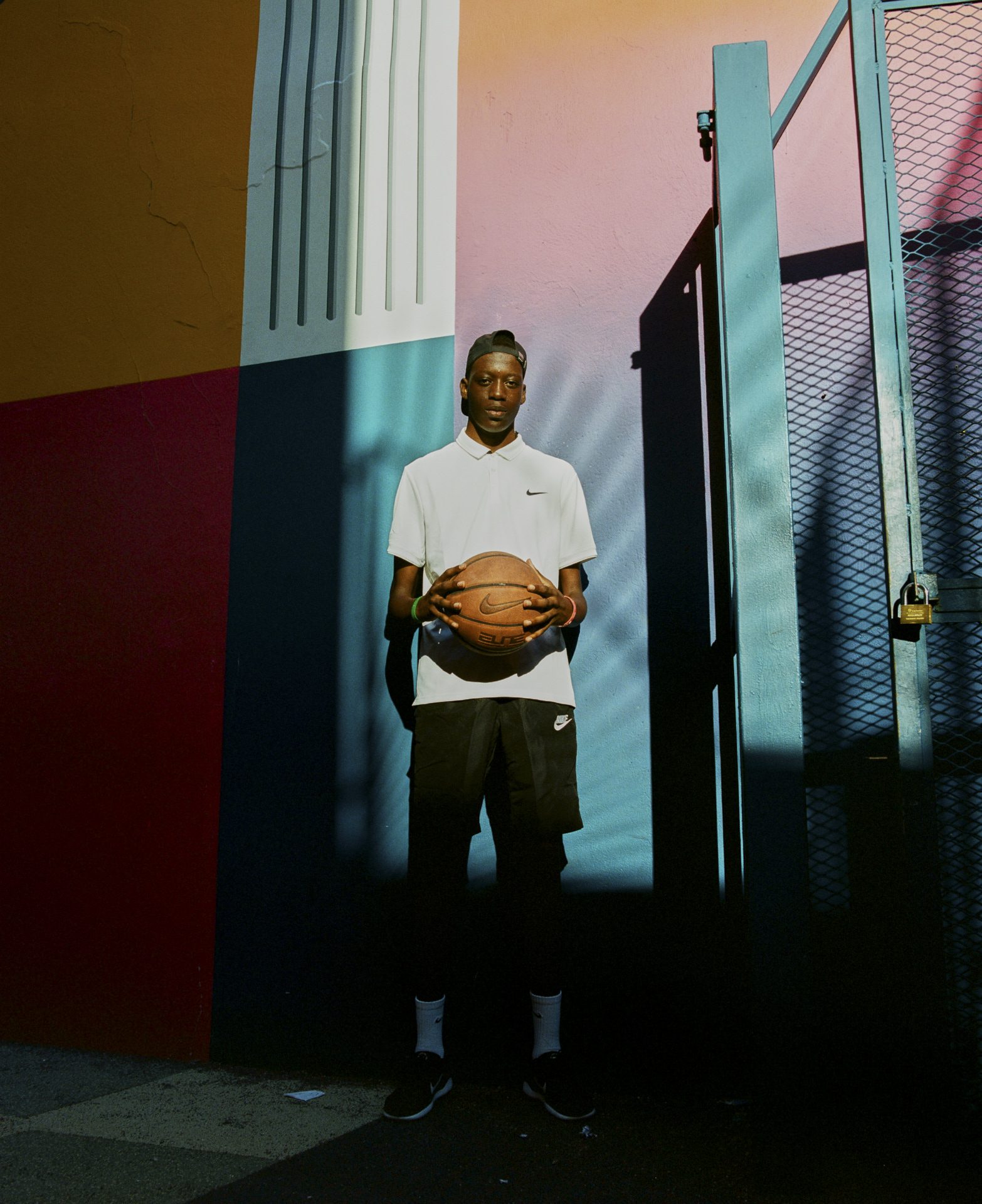 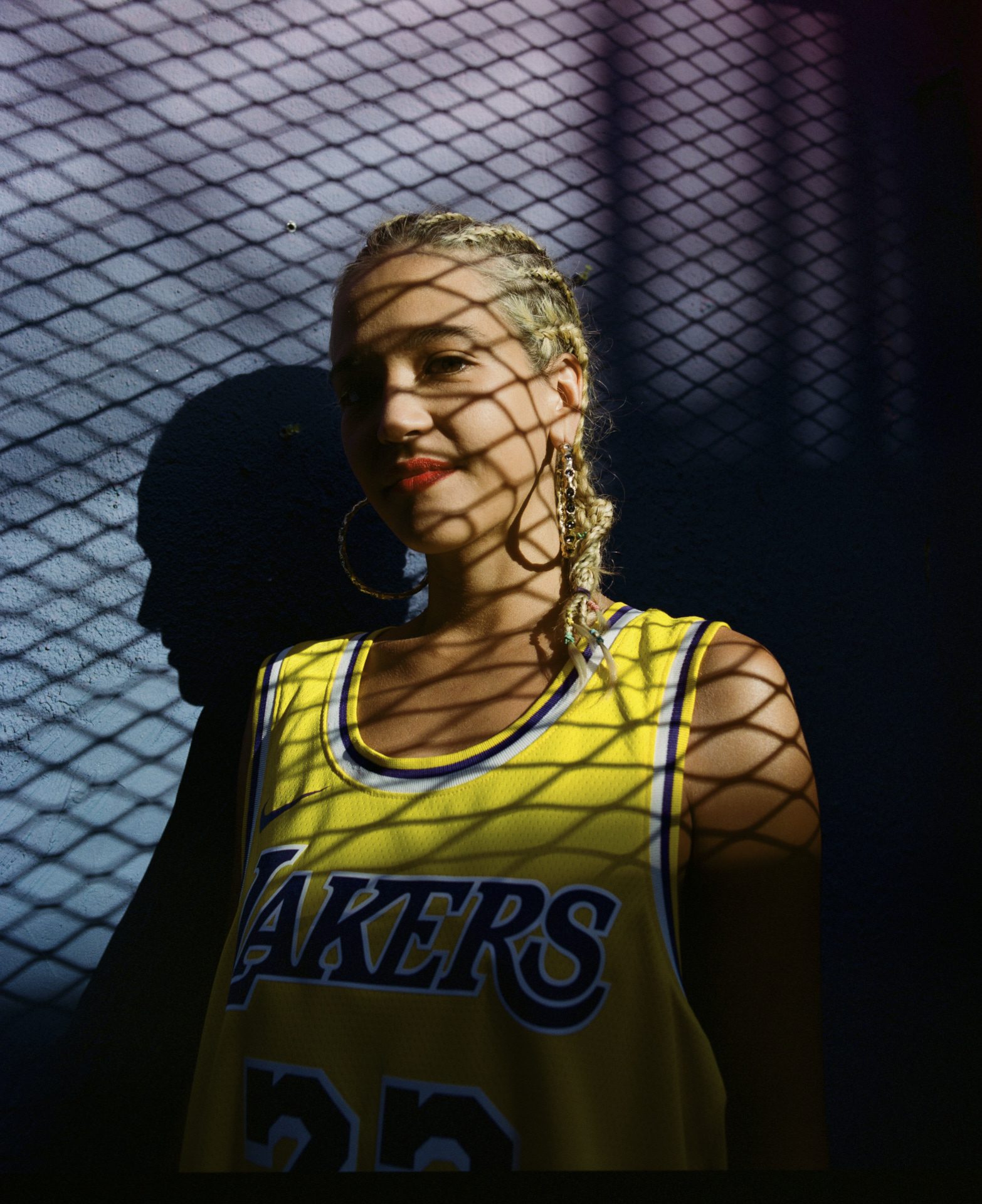 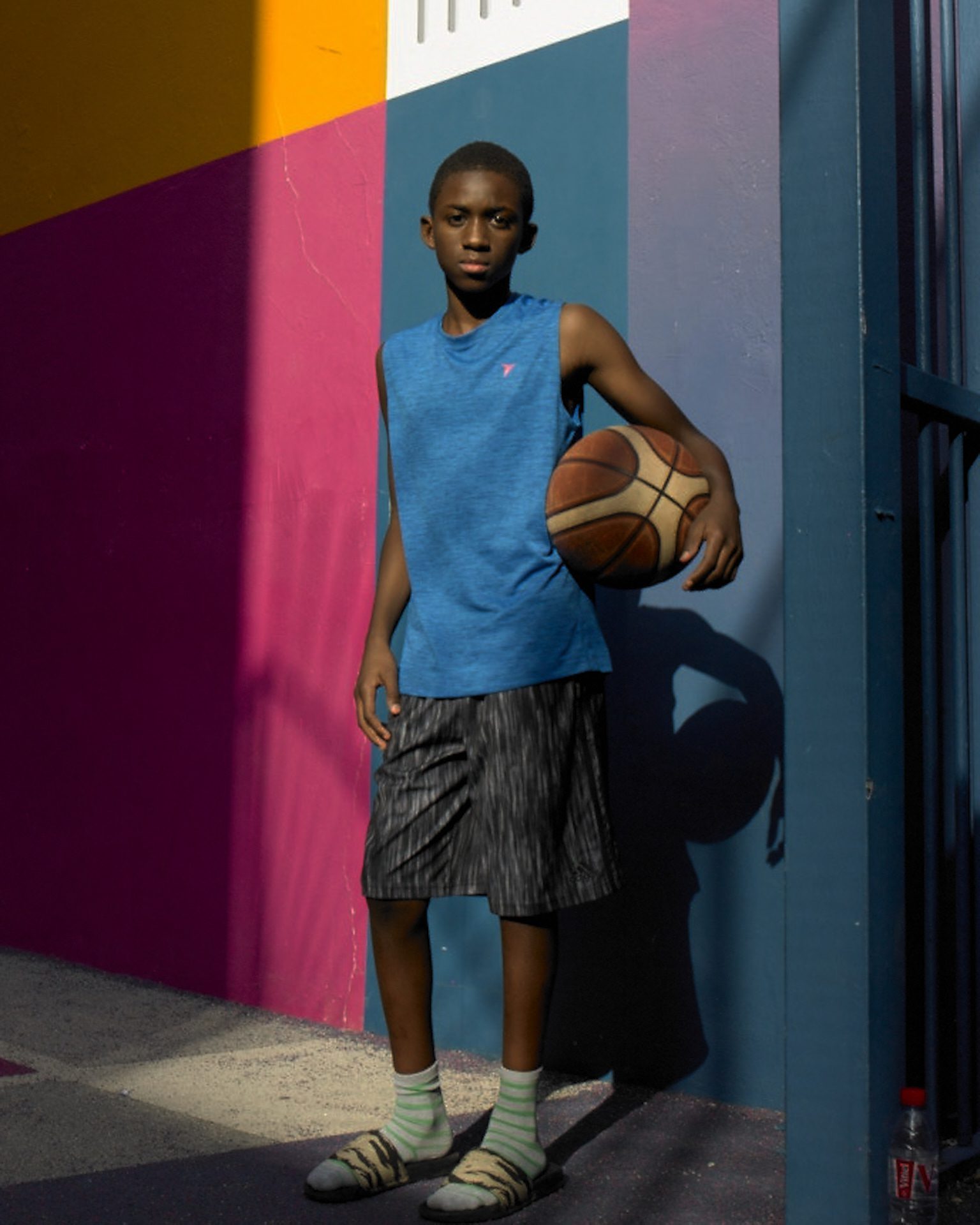 “I like to document beauty, obscurity, and find truth. I like to explore candid composition in the everyday. Those moments you see in a glimpse with the eye, but that you cannot hold as you would wish.”

Standing at six foot four inches, Sam says that he couldn’t easily hide himself on the basketball court, so he stayed and hung out for three days before, bringing his cameras onto the court.

“I was a bit conscious of intruding and there weren’t many outsiders there. When I met Stéphane I asked him if it was cool for me to hang out and, at that point, he could see my connection with some of the kids there. I’d spent a few days getting to know them. Stéphane said, ‘If you’re a friend of the kids, then you’re a friend of mine, because we’re all family.’

These images fit within Sam’s wide body of work, which always tends to capture unusual portraits of subjects in their natural environment.

“I love portraiture, but in a space like that you have to let it flow. I was a visitor as well, so I just wanted to watch and see it all play out in its most natural form. Sometimes you can end up imposing, and that’s when people become conscious of you and you lose some of that magic. “

“I grew up in the countryside in Mudgee and my parents owned pubs and I grew up in them. I never thought it was unusual, but as I got older, I realised the people I had met were real characters. They were what inspired me to travel and find unique people and places. That’s what I love about photography – the people – and that’s what I fell in love with.” 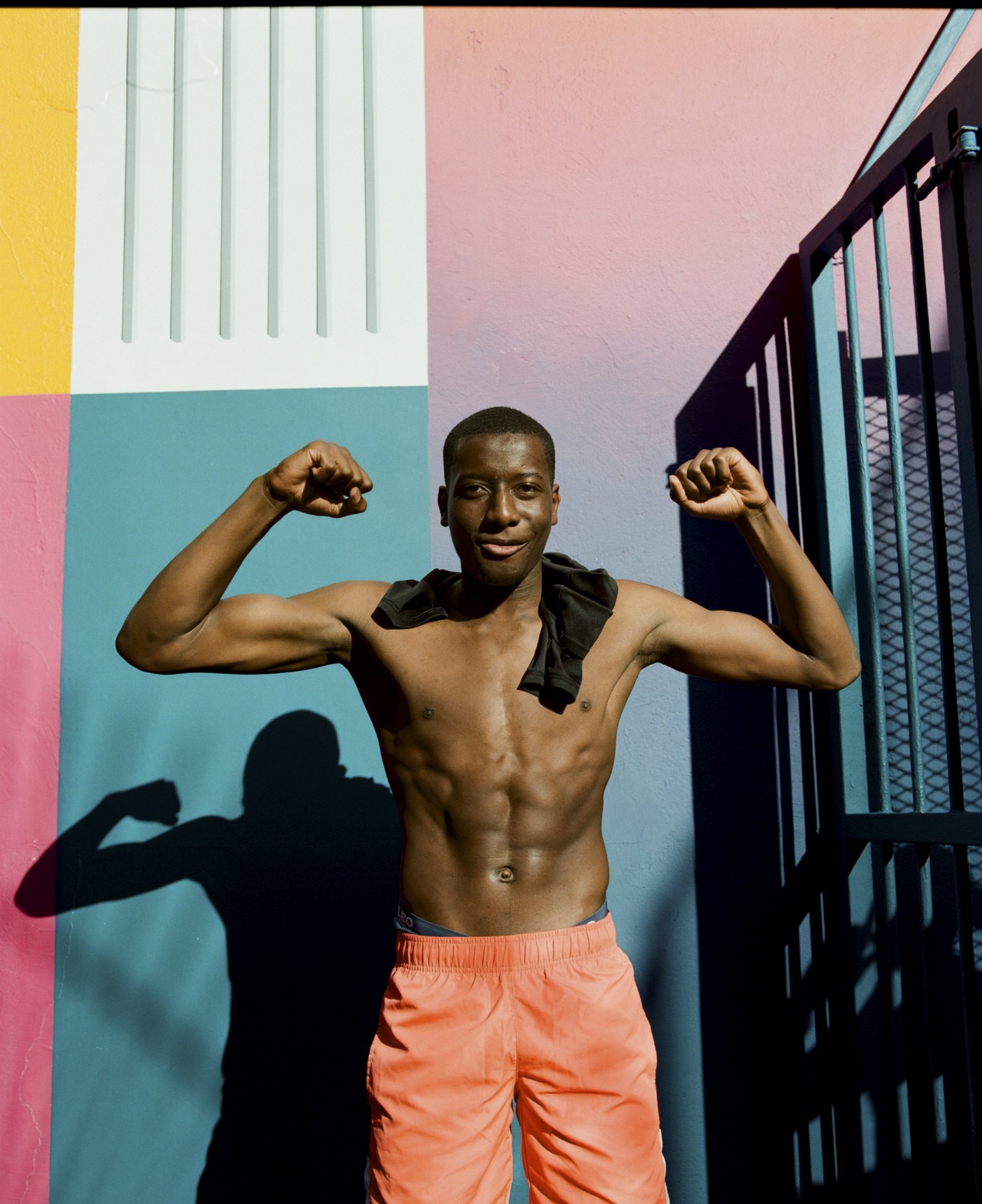 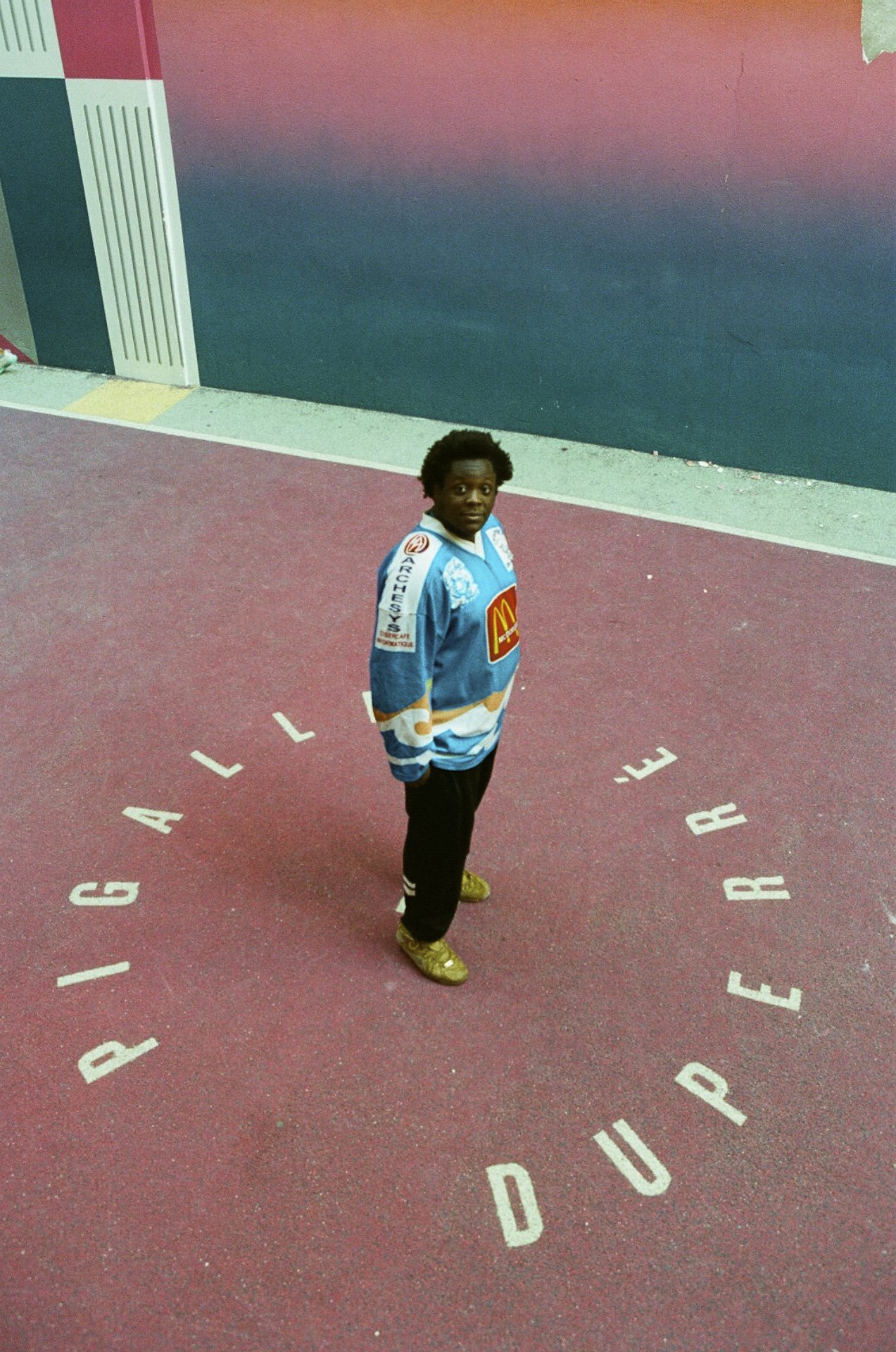 “My biggest observation was how diverse the people’s backgrounds were. But Stéphane comes from two different worlds. His mum was a dancer at the Moulin Rouge, so he grew up there with all these extrovert Parisian performers, and the other part of his life was being a kid on the streets of Pigalle. He had this very flamboyant part of his life influenced by all the theatre and then he was also obsessed with street life and sport and basketball. I think that court is the one he used to play at as a kid and it was always rundown. He got in contact with Nike and they collaborated to renovate the court and made it into this amazing space and soaked it in colour.

“The acoustics of the court are incredible, because it’s between these two mid-19th-century sandstone Parisian apartment blocks. It was filled with the sound of all these balls hitting the court. It’s got its own thing going on. It’s just nice to listen to that among the sounds of the kids playing and laughing,” Armstrong says.

“The day LeBron James visited, once he left, the court turned into a party and kids rolled in on Segways with these massive speakers, like club speakers. Everyone was just dancing. LeBron was really cool. The anticipation and that energy was incredible. Once he arrived, half the kids were just speechless, lost in total admiration. What’s so interesting about the whole thing is that the only other time he’d been at the court was 10 years before that, when the court was christened and opened.

“When they opened it, they had imprints of his hands moulded into the wall. So you can imagine most of these kids, over the past 10 years, have grown up seeing LeBron’s hands on the wall and having him as a hero.

“Every day is similar there. It’s just like the hang-out spot. You can see your friends – that’s what it’s all about. To find a community like this is really unusual. I was there for four or five days, and these kids are so open with each other and expressive with their joy and what they’re involved in. Someone shoots a hoop and they all get together and have a big huddle,” he says.

“The first day I was there I didn’t take any pictures, I just watched them. I could just feel it was special. I wanted to try to capture that. I wanted to be sensitive and real. I grew up in the countryside in Mudgee and my parents owned pubs and I grew up in them. I never thought it was unusual, but as I got older, I realised the people I had met were real characters. They were what inspired me to travel and find unique people and places. That’s what I love about photography – the people – and that’s what I fell in love with. As I said, I don’t follow sport, and I’m quite a solo person – I’m happy to go and wander and not be a part of anything in particular – but I do also understand the importance of having a team.

“Just to feel like you belong and have love. I admire it when people have something like that. It’s an important part of being a human.”

Matagi Mālohi: Strong Winds
A Heart Of Stone In The Indian Desert